Lights of Peru, The Inca Empire

Explore Perú in 8 days, travel from Cuzco to the Sacred Valley and visit the legendary Machu Picchu.  Immerse in Peru’s ancient culture and take a city tour in Lima, the capital of the country.

Welcome to your 8-day trip to Perú
Lima

Welcome to your 8-day trip to Perú
Lima Upon your arrival in Lima, we’ll be waiting to drive you from the airport to your hotel. Enjoy your leisure time in Lima!

Lima is the capital of Peru; the jumping-off point for nearly all trips to the country. In the Colonial Era, it housed the viceroyalty, making it the most powerful city-hub of South America.

Enjoy your leisurely evening by taking an exploratory walk over to the Plaza Mayor, and make sure to try the typical cebiche (fish cooked with lemon) or the special anticuchos (we’ll let you figure it out on your own…!). Today we’ll pick you up at your hotel to explore Lima’s old town, a UNESCO World Heritage Site packed with fascinating historic buildings.

We’ll start with a scenic tour in the colonial downtown, which expands from the Main Square, where you can appreciate the grandiose architecture of the Spanish Empire, like that of the Cathedral, which was built up in the 16th century and finished after 80 years of hard work!

Our next stop will be to Casa Aliaga, a colonial mansion that was granted in 1535 by chief conquistador Francisco Pizarro to Jerónimo de Aliaga, one of his captains.

Since we’re on the topic of love encounters, we’ll finish the day at the “Love Park” built in 1993 to celebrate love in all its forms. Nestled in the upscale coastal district of Miraflores, you can admire the cliffs from its colorful mosaic benches and take in the most beautiful view of the Pacific Ocean.

After enjoying this romantic place and meeting the famous sculpture which immortalized the tender kiss of two passionate lovers, we’ll drive you back to your hotel.

Continue your Perú travel itinerary to the Sacred Valley


Continue your Perú travel itinerary to the Sacred Valley Today we’ll pick you up at your hotel and take you to Lima airport to continue your 8-day trip in Perú. Take an hour flight to Cuzco, maybe the most international destination of Peru, since (but not only because…) Machu Picchu, the world renowned Inca fortress, is located only 4 hours away!

But… before we explore Machu Picchu, we have one lesser-known hidden gem to check out first; it’s time to discover The Sacred Valley.

Upon your arrival in Cuzco, we’ll drive you to your hotel in the Sacred Valley, 20 miles away from the city, for you to enjoy the evening at your leisure.

What can be more sacred than food? For us, nothing, and the Incas thought so too! That’s why they called this green valley a sacred place; most of the food that they needed grew here, amongst supersized mountains.

The first development in this area was the food. Then came the construction of villages, where the Inca culture is still very present in each handcrafted poncho and the ancient terrazas de cultivo, giant, circular constructions where Incas used to develop top-tier agricultural techniques and skills. Continue exploring the Sacred Valley, and visit Pisac, famous for its craft market where you’ll find the most exquisite piece of  jewelry, ceramic and textile craftwork. We’ll continue our trip visiting the archeological site of Pisac to admire the stone terraces built by the Incas, and last, we’ll head to Ollantaytambo to visit its stunning fortress. Admire the remaining towers and walls that used to keep safe the citadele and the royal guests that it used to host. Your tour to Machu Picchu begins with a 4-hour train ride to Aguas Calientes (literally, hot water). This town is also known as “Machu Picchu Pueblo” and is the last stop before entering the remains of the most important archaeological site in Peru. Machu Picchu means “Old Mountain” and is considered a World Heritage Site by UNESCO.

You’ll finally reach Machu Picchu (the ancient sanctuary and retreat for the Inca Pachacutec) after a short transfer by bus through the mountains.

Here, when we arrive at the exact destination that is the highlight of your trip, we will have special moments which will most certainly be cherished forever. Enjoy your first impressions of this jaw-dropping place, and breathe the magic in the air.

At the end of the tour you will take a bus back to Aguas Calientes and have lunch at Café Inkaterra in Machu Picchu. Enjoy a leisurely time during the rest of the afternoon and a restful sleep in the town of Aguas Calientes.

Some of the places you can visit include the Intipunku, or “Sun Gate”, where the sun rises every day through a stone passageway, or the Inca Bridge, an incredible stone building that served as the entrance and exit of the citadel. 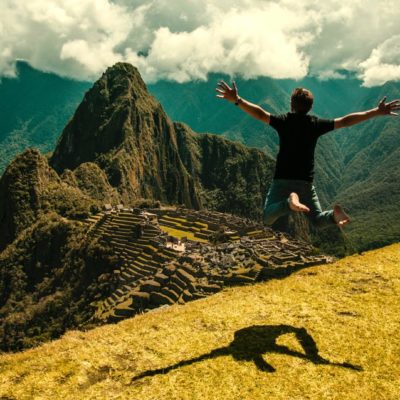 In the morning we suggest that you return to Machu Picchu and continue exploring some of the many attractions of the citadel.

In this second visit you can climb the Wayna Picchu (subject to space availability), which means “Young Mountain” as opposed to Machu Picchu, the “Old Mountain”. This ascent takes about an hour and its main attraction is the “Temple of the Moon”, a complex of underground structures likely to have been used by the elite.

If you would prefer a different option, take the day to visit the interesting town of Aguas Calientes, its historic Plaza de Armas, and the many local markets nearby.

In these markets you can find various types of local handcrafts, typical food, and even different potions for finding love or keeping good luck on your side.

In the afternoon you will head to the train station of Aguas Calientes and take the train to Cuzco where you’ll spend the night.

Continue your trip in Peru
City tour in Cuzco

Continue your trip in Peru
City tour in Cuzco Today we’ll pick you up at your hotel to start your Cuzco tour with a visit to the Coricancha, also known as the “Temple of the Sun” the construction of which was ordered by Inca Pachacútec (1438-1471).

This is where the Sun (Inti, in Quechua) was worshipped during the reign of the Inca Empire, and during that time its walls were fully covered with gold sheets and its courtyards were adorned with golden corn and life-sized sculptures of llamas.

We’ll continue on to visit the Cathedral, the most important building in the Main Square (whose construction lasted almost a century) and one of the most splendid Spanish colonial churches in America.

Our next stop will be the Sacsayhuamán fortress, an emblematic Incan piece of work, which protected the Holy City. The Sacsayhuamán complex was constructed with giant megalithic blocks, the transportation and construction of which continue to be a mystery.

This day will end with a visit to some archeological main attractions. You’ll visit Qenqo, located just over 2 miles away from Cuzco City, an archaeological complex mainly used for religious purposes, and where it is believed that agricultural rituals took place.

You will finally visit the vestiges of Puka Pukara, located 4.5 miles away from Cuzco. Puka Pukara, which means “red fortress”, was an architectural complex presumably used for military purposes.

At the end of this full historical and natural immersion in Cuzco’s heritage, we’ll drive you back to your hotel.

The end of your 8-day travel itinerary to Peru


The end of your 8-day travel itinerary to Peru This is the end of  your 8-day travel itinerary to Peru…at least for now! At the appropriate time, we’ll pick you up from your hotel and head to the Cuzco airport to take your flight.

Keep on exploring Peruvian Amazon or the White Stone City of Arequipa with, read about it in Our Trips.

If this trip doesn’t meet your expectations we can tailor it to your needs and budget.

PEACE OF MIND THIS IS A CARBON NEUTRAL TRIP

We care deeply about our planet, as we know you do. When you book with us, the carbon emissions from your trip are 100% offset. We are working to create more sustainable, responsible and meaningful ways of exploring South America. It feels good to do it right. Learn more about our actions against climate change here.

Flights in South America cost approximately $100 to $300 USD per segment (destination). We offer special rates on flights for this tailor-made itinerary.

Flights in South America cost approximately $100 to $300 USD per segment (destination). We offer special rates on flights for this tailor-made itinerary.

Request Info for Lights of Peru, The Inca Empire

If you feel this trip is just what you are looking for, you can

The Most Recommended Company for Travel to Argentina

Best places to visit in Argentina include amazing nature and off-the-beaten-path tracks. Read about our local best attractions in Argentina […]

Planning a Trip To Patagonia

Are you planning a trip to Patagonia? Discover all you need to know to get the most out of your […]

Peru is one of the most popular destinations in South America. Many travelers visit the country every year. In this […]

Reserve this trip Lights of Peru, The Inca Empire

Let's keep together & connected
through our social media channels: