What animals can be found in the Atacama desert?

Animals in the Atacama Desert, the driest on Earth located in the north of Chile, are not easy nor common to find. However, there some typical wildlife and flora that survive in these arid conditions. To some of them, these are the ideal conditions to live and breed!

This is because there are not only piles of sand in this Chilean desert, here you will also find lagoons, geysers, moon-type valleys, hot springs and an endless and gleaming salt flat.

Let’s talk about the mammals and birds that inhabit the Atacama Desert.

These are vertebrate, warmed-blooded animals that usually have fur or hair, and breast-feed their young.

This cute rodent is endemic in the north and the coast of Chile, but some of them have been found in the Atacama Desert too. It feeds from grass, seeds and insects. Their characteristics features are their big ears, a long tail and brown-coffee tinted abundant hair. It uses to live in scarce-vegetated places and can be also found in Bolivia, Perú and Argentina.

This carnivore can also feed on eggs, fruits and seeds. Though if it finds a lizard, rodent, or even a scorpion, it won’t hesitate to chase them! Its Latin name, Lycalopex, means “false fox”. Though it resembles a fox, in fact, it’s a caned related to wolves and jackals. It has big ears and a russet-fringed pelt. It can be found also in Argentina, where it’s usually hunted for its pelt.

These large animals can be seen grassing in the few vegetated places of the Atacama Desert. They are both relatives to the llama, but vicuñas need to be near a steady water supply, guanacos can survive longer in desertic lands. The vicuñas are smaller than guanacos, and its wool is considered one of the finest in the world. They are very territorial and they live in family groups. It is also the national animal of Perú where the vicuñas can be found too.

The guanaco can double a vicuña in weight, and they usually have a dark fur head. As the vicuña, the guanaco lives in family groups and has coveted wool. The guanaco has 2 interesting survival skills: He can regulate different parts of its wooly body to control heat release, and its blood has 4 times more red blood cells to cope with high altitudes. A guanaco normally lives at 4000 m.a.s.l

A bird is a warm-blooded egg-laying vertebrate, that has feathers and winds, and can usually fly. Birds are the most abundant group of animals in the Atacama Desert.

This is obviously a bird that can’t fly, but an excellent swimmer. It lives over the coast and nests on the cliffs overlooking the ocean. It can be found also in Perú, and its nearest relatives are the Magellan, the Galapagos and the African penguin. It’s a medium-size penguin and a migrant bird that feeds on pelagic schooling fish though it depends on its geographical location. The Humbolt Penguin lives all over the coast of Chile, from Patagonia to the Atacama Desert, and also in north Peru. In Chile, the most important breeding colony is at Isla Chañaral.

These spectacular pink-feather birds can be seen at the Salar de Atacama and also at the Highplain Lagoons called Miscante and Miñique. It breeds mostly from algae, and are excellent swimmers. The flamingo can fly too and when migrating it does it in V-shape formation, a beautiful image to see! The Andean species is the largest in South America.

This small bird from the Humminbird family and is the smallest bird in Chile. It is typically a solitary feeder and eats mostly nectar from flowers. Its call consists of a series of rasping and quiet notes, and young males are similar in shape to females. Males make a peculiar sound when flying similar to the buzz of insects and can be distinguished from females because they feature a violet-read throat. 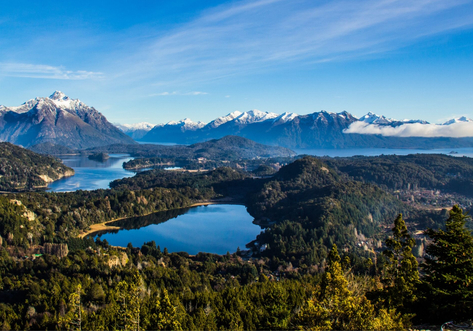 5 Affordable Trips to Argentina and Beyond

We know, we know: the idea of vacation in and of itself makes your wallet cringe. It’s redundant to go […] Travel to Argentina: Get Your Desert On

https://sayhueque.com/Chile has established itself as one of the best adventure destinations in the world and a big part of that […] From the heart of the Andean high plateau to the rugged landscapes of Patagonia, Chile offers an incredible diversity of […]